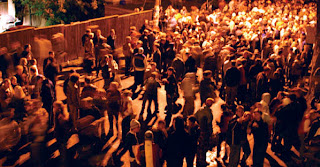 Aberdeen Street on Homecoming weekend,
located within the Queen's University Student Village (Ghetto)
I came to Queen's two years too late. Why? Well, friends, starting last year, Queen's University officially cancelled its annual Homecoming tradition due to the epic riots and rowdiness Queen's became famous for, along with the subsequent debt that Homecoming brought to the city of Kingston. Students flipping cars, police busting out the tear gas. As a result of the past years' riots, Queen's cancelled Homecoming last year and law enforcement in Kingston during this particular weekend has been militant ever since. Incredibly militant. The invasion of Prague Spring 1968, really.

Yet as we all know, Queen's will always recognize its traditions. A tradition to respect tradition. And despite the university's cancellations, unofficial Homecoming activities still took place this past weekend. Homecoming was now cleverly called Fauxcoming. And despite the (in your face) police presence, Homecoming (Fauxcoming) weekend was incredibly fantastic. Awesome, great, amazing (I'm running out of adjectives). Plus, no cars were flipped this year, I promise.

As a side note, the latest issue of Queen's University's The Journal published an article discussing the extensive police presence in the Queen's community this weekend. "Fauxcoming Fallout: Police estimate the weekend cost around $375,000." To read the full article, click here. A question up for debate: was the $375,000 really necessary?

Well, my friends, Homecoming weekend was incredibly enjoyable. And while the amount of money spent on policing bothers me (a topic for a separate blog post, I'm sure), on a superficial level, I had a great time. I'm still constantly amazed at how different the Queen's student culture and environment is compared to what I saw at the University of Toronto. Events like Homecoming demonstrate the close-knit, student community spirit that we all grow to love. The following are some anecdotes and observations I made this past weekend:

TWO: Experiencing Homecoming as a graduate student is far different from going through it as an undergraduate student. You know you're getting old when you turn in at the early hour of 1:00 am, just as the perky undergrads next door head out in bar attire. Just as you pull on your pajamas and settle in bed to read the latest issue of The Economist. Because you're 50.

THREE: At midnight on Friday night, crowds of people turned to stare as uniformed police on horseback trodded down Princess Street. It was quite the spectacle. Saturday night was no different. Students were ticketed for carrying water bottles, as police suspected the water was mixed with traces of vodka. Hundreds of students were arrested on Saturday night, even if they were only slightly inebriated. Police cars patrolled every street. Drunk tanks were parked all over campus, ready to arrest and aggressively throw in (even slightly) drunken students. Wow. Don't tell me the G20 came to Kingston?

FOUR: On Monday, the day after Queen's epic weekend, the city smelled. Of cheap wine and nights students can't remember. After an entire weekend witnessing house parties, late nights, riots, and rowdy university students, I'm not surprised (yet quite amused) that the city reeks. Alcohol and bad decisions? That, my friends, summarizes a university's Homecoming weekend. Seriously, it really is just like the movies. Hollywood depictions aren't too far off!

FIVE: It's all about the football, my friends. And football loyalty here is fierce. Imagine thousands of people standing on bleachers cheerfully chanting, "We all got into Ottawa!" and "Safety school!" in an effort to distract Ottawa's quarterback and insinuate our guests' institutional mediocrity. Queen's fans are entertaining yet vicious, I've discovered. Vicious but so very amusing! Because its true. I did get into Ottawa.

SIX:My housemates, housemate's visiting friends and I walked to the football game together, following the mob trickling towards Richardson Stadium. Upon arrival at the gate, the security guard requested that she "pat me down," a process completed with each entering student. She then rummaged through my purse. And pulled out my apple. I smiled and noted, "Sorry, that's my apple. It's my breakfast, can I take it in?" Not responding, the security guard put my apple to her ear and began shaking it vigorously. Confused, I asked why she was shaking my apple. Nodding, she gave my apple back to me to place back in my purse. In response, she told me she couldn't be too careful. Apparently, hollow apples have been previously used to sneak various forms of narcotics into football games. Drugs in an apple. Wow. Clever.

SEVEN: Once a Queen's student, always a Queen's student. At halftime during the football game, students rushed the field, along with hundreds of alumni wearing Queen's jackets, waving flags that stated their graduating year (i.e. Science 1955). Thousands of students cheered themselves hoarse. The loyalty and attachment demonstrated for this university makes you tear up, really. And these sentiments are demonstrated so well at Homecoming, witnessing retired men marching around the football stadium, cheering for the school they attended and loved. It was very sweet to watch.

EIGHT:The area around Queen's is composed of about 80% students, a result of being in such close proximity to the campus. However, come Homecoming weekend, the student population triples. It looked like the world came to Kingston. Busloads of students from other universities came to join Queen's students for an epic weekend. Who says Homecoming was cancelled? It may have been cancelled officially, but I stand firm in the fact that Queen's reputation for memorable Homecomings will always have people coming back for more. And if the university decides to cancel Homecoming forever, I'm sure the traditions will still continue. Fauxcoming for the next twenty years? So be it.

(As a side note, student responsibilities during Homecoming, especially in regards to alcohol, will be the topic of a separate blog post. There's a reason the police were here. I'll address this issue at a later date).

I cheerfully admit that my weekend was amazing. I had a great time. I don`t know if I`ll ever experience Homecoming weekend at this Americanized level ever again. But as September draws to a close, let's chalk Homecoming/Fauxcoming weekend up as another memorable experience I've had here at Queen's. One of many, I'm sure.

"Home is a place you grow up wanting to leave,
and grow old wanting to get back to."
- John Ed Pearce

"Every parting is a form of death, as every reunion is a type of heaven."
- Tryon Edwards
Posted by Barbara at 10:36 PM